a note from the editor 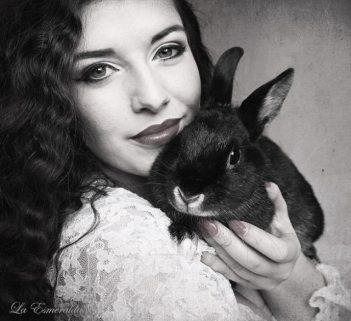 Jesusita is in the limelight.  This is where she belongs.  I love her.  She is one of my favorite characters ~ one of several reasons why I’m more than satisfied when she rubs up to me.  Yes, I’m the rabbit.

I discovered her in a history book while living, working, writing in Albuquerque, New Mexico, some years ago.  She was the housekeeper of Padre Jose Manuel Gallegos, a pastor of Albuquerque when the U.S. Army dropped by in the mid 1800s.  Author Willa Cather made Gallegos into a villain in the popular novel, Death Comes For The Archbishop.  But I know better, because before I read Ms Cather’s book, I read a biography of the padre entitled,  Tres Macho ~ He Said, written by Fray Angelico Chavez.  Gallegos was no villain.  He was Jesusita’s lover.  You can find her full Spanish roller-coaster name in Tres Macho.  She & the padre were the talk of the entire territory!

Jesusita’s husband, a Mexican soldier, was killed by Indians.  Gallegos gave the beautiful widow, who had several children, a housekeeping job.  And a romance grew into a living legend!

The 3 stories I wrote under the pseudonym of Cloyd Campfire in which Jesusita appears are the only shining limelight she’s got that I know of today.  These obviously tall stories (one rhymes), featured below, got mixed up with modern day politics.  Sometimes that happens.  These stories reside in The Davy Crockett Reincarnated Almanac ~ which got really political 2001-2008.  Gotta preserve the democracy, you know.

I have employed a few pen names throughout the years. Rawclyde with an exclamation mark (!) is the one too sticky to go away...
View all posts by Rawclyde! →
This entry was posted in love peace and freedom and tagged Albuquerque, Cloyd Campfire, editorial, history, Jesusita, literature, New Mexico, Padre Gallegos, romance, tall stories. Bookmark the permalink.